You are here: Home / bronze show 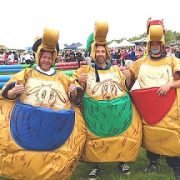 Our Bronze Show It’s A Knockout for 2018 has had some new great new games, inflatables and changes for the 2018 season to make them even more entertaining for the teams taking part and watching audiences.

Both the dressing up games on the Bronze Show It’s A Knockout for 2018 have changed. The penguins game has been replaced with a similar style Kangaroo sumo suit one which will help make the game a bit more versatile to different sizes and abilities of teams we encounter at days.

The second dressing-up game on the Bronze Show sees the addition of the funny new game “Widow Twanky’s Laundry”. In this game parts of a spotty padded sumo suit are collected through our Mangle inflatable obstacle, these pieces are then assembled together and worn by one of the team members to race back down the course.

The Bronze Show It’s A Knockout for 2018 also has a new inflatable slide game “The Flume Slide”, and we’ve moved the Bubble Cave inflatable game over from the Silver Show over which means that four of the seven standard games are different this year, plus with the tweaks to the other games gives the Bronze Show for 2018 has a fresh new feel for the many people, charities and organisations who come back to book our games year-on-year.

All these changes make our Bronze Show It’s A knockout ideal for charities and organisations using our games for their fundraising ventures. the Bronze Show is a great introduction step onto the It’s A knockout fundraising ladder for those who have not ran an It’s A Knockout day before. Please Contact Us if you’re new to Knockout and we’ll talk you through everything you need to know.

You can also find other Blog articles about how our Knockout’s can be used for fundraising events. 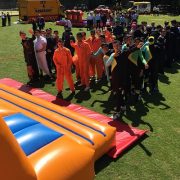 Many attractions that are available for hire for school activity events just can’t cope with big numbers, or can’t cope with the temperamental British weather.  However an It’s A Knockout for Schools can easily cope with numbers over 200-300-400 and more, when run in the right manner and can also be run in all weathers or re-located to a schools sports hall. This makes it ideal for schools activity days. 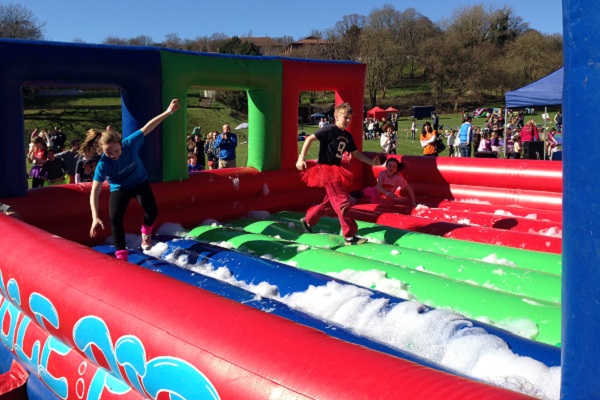 It’s A Knockout for schools

It’s A Knockout for Schools uses games and inflatables that are colourful, fun and exciting. Also, the bigger the set of games, the more inflatables and adrenaline based it is. At Knockout Challenge we offer three sets of games, graded as Bronze Show, Silver Show and Gold Show. Each set with a better and more exciting set of games using more and bigger inflatables. As an example, our “Bronze” set of games needs just under half a football pitch in room, a “Silver Show” just over half a football pitch, and a “Gold Show” needing a whole pitch.

Knockout can fit into a morning or afternoon school timetable and can even be run in both, with one set of children (or year group) in the morning and a different set in the afternoon.

There are several ways for the children to be split into teams. The games tend to be designed for teams of around ten with each game using three teams per heat. Getting the children into these teams can be done as follows.

Everyone in every team, gets the chance to take part in every game.  No one gets left out. However, individuals can opt out at any time, it just means that someone else does their go for them. We have wristbands available if requested to help with team identity. 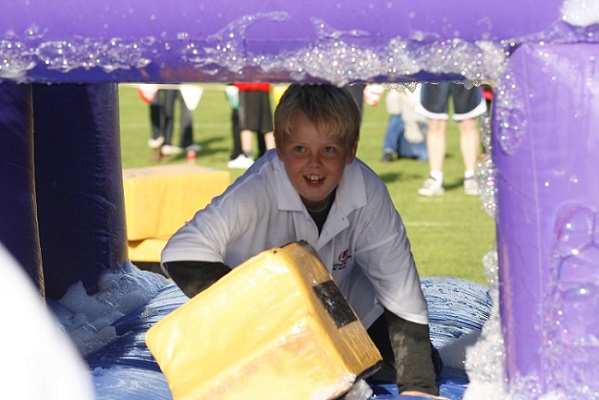 Why not use the games as a means of fundraising for the school or a chosen cause or charity?  Each child could be given a Sponsorship Form to pass around family and friends. If each child was asked to raise £5 or £10 what project or cause could your school use this for?

At its full capacity if all the games are active simultaneously, the games arena works like a giant games carousel with teams going from game to game to game. If you imagine the games arena being like a large clock face, with games on each hour hand (as an example) and with the teams positioned on each game. Once a set of three teams have “completed” a game, they then move onto the next game in the rotation (and around the clock).

Each of our games for It’s A Knockout for Schools has three lanes (red, blue & green), therefore three teams are active on a game. However, we place up to six teams on each game. The first three teams do the game, then the second three, then the six move onto the next game. This gives a sort of “game-on, game-off” method with some time doing the game, followed by a little rest and cheering time.

Water, Bubble Games and The Weather

Usually knockout has wet and bubble games. Dry games can be run if desired, and the games can carry on even if it’s raining. Unlike other activities that you can hire, “It’s A Knockout” will carry on come rain or shine. If you have a sports hall, it can also be ran indoors. The decision can be taken upon our arrival as to “indoors or outdoors”. 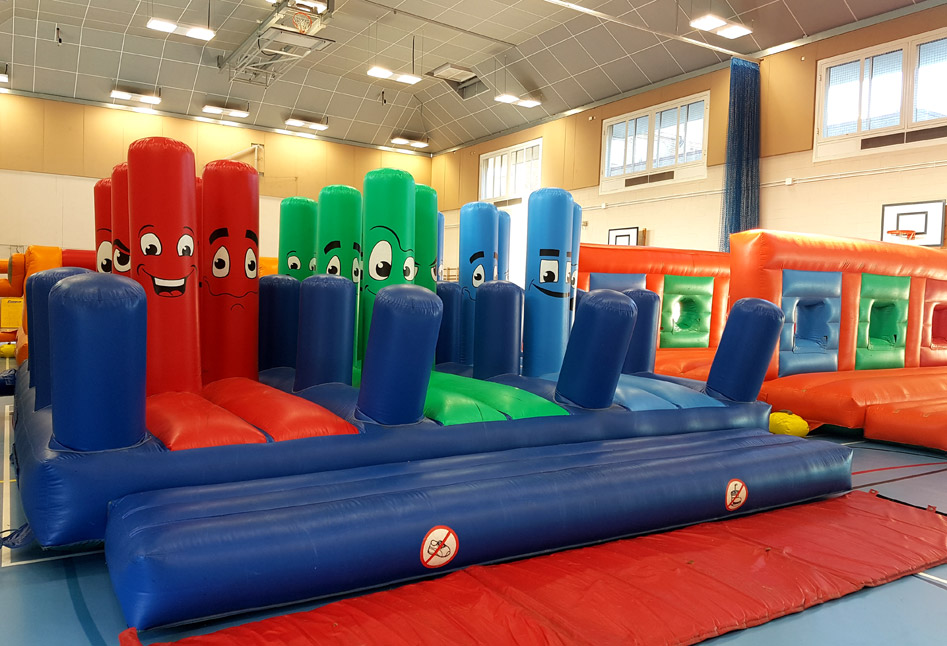 If you would like some wet games, we only need access to a hosepipe on arrival (laid on to the games area, and until the start time). Two to three hundred gallons of water (about 15 dustbins worth) is all we need for a fantastic effect.

We have our own sound system and play party music whilst the games are being played out. Plus with the commentary and all the noise the children are making, “Knockout” makes a great entertaining and colourful event. 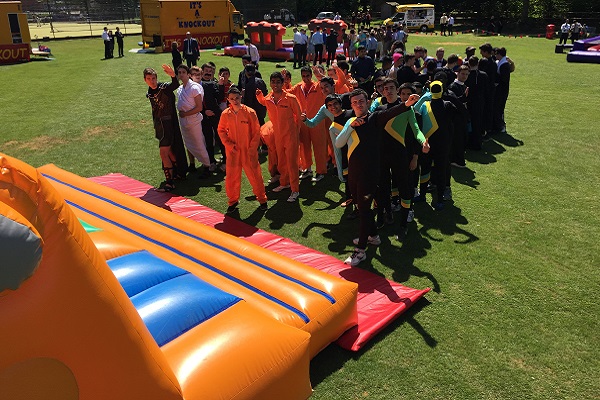 Schools Its A knockout 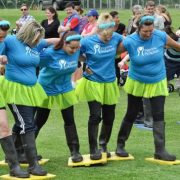 One of our Knockout Challenge colourful It’s A Knockout games shows is a great way for a charity to hold a fundraising event. During the summer season our yellow It’s A Knockout vehicles travel all over the UK for great charity fundraising causes. We are pleased to announce that the general public are invited once again to enter the Pilgrims Hospice Charity It’s A Knockout for 2017. 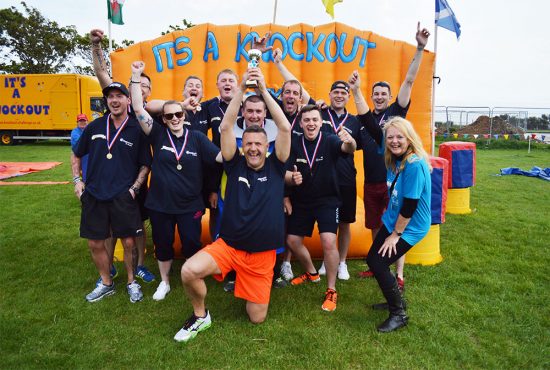 On Sunday July 9th 2017, Pilgrims Hospices will be running two events this year on the same day. Our Silver Show will be entertaining the crowds and teams at Faversham Recreation Ground ME13 8BF and our Bronze Show will once more be once more at Government Acre, Ramsgate.

Both events start at 10am. There will be lots of stalls, attractions and fun on the day.

Teams of up to ten people, fit or unfit, are invited to enter a team and join in the fun. If you live in the area, why not get some friends together and come and join in the fun. There will be other attractions present so bring the family along, if even just to watch and soak up the atmosphere.

Please Contact Us or more details about attending or entering a team into an event. 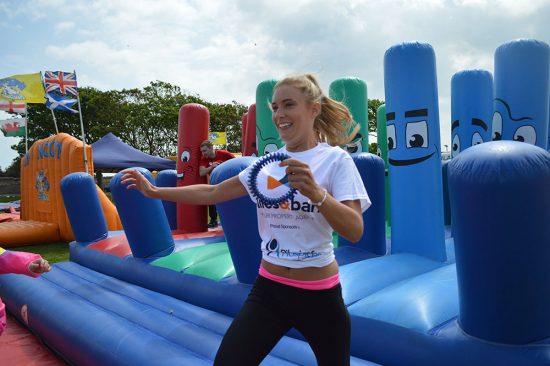 If you are a charity looking for fundraising ideas, please contact us. We can not only put details of your date on our Events Page, but if you’ve got lots to say, we’ll even blog-news about it!